OUTside THE PRACTICE II: Art Exhibit

The Sentry is a painting representing the culmination of years of my personal affection for the LaSalle Street Bridge and more specifically the bridge tender houses. Created for a themed exhibit: Art by Architects, "Outside the Practice II” and Curated by Stephen Wierzbowski, FAIA and Edward Keegan, the exhibit was an invitation to architects to create works based on interpretation and expressions of Monuments and Memory.

In my humble opinion, the LaSalle Street Bridge is the grandest of all the Chicago River draw bridges. The sweeping pony trusses against the pomp of the four Beaux-arts tender houses anchoring the corners of the bridge and framing the spectacle of the river. It is an inspiring visual feast. It is also part of my own daily ritual; walking over the bridge marks the beginning and end to every workday for me. These architectural gems are exquisitely composed, proportioned and detailed, each orientation being different. The houses facing Wacker or north of the River, are extravagantly crowned pavilions (even sporting a crest!) - which must be walked around to pass, much like a guard or sentry post. In contrast, the sides facing the river are revealed as grand, elegant “towers" rooted deeply in the river cradling the bridge trusses.

I often focus on the design of the tender houses and have drawn and photographed them many times, over the years. I focused on the southeast, Beaux-arts style “tower” as the subject of the watercolor and because I thought it was an appropriate homage to the architecture, it is rendered in the Beaux-arts style. The scene depicts a single tower, an abstracted object itself as a monument. With only a suggestion of its actual attachment to the bridge, I rendered it realistically otherwise, depicting its current state of disrepair. Now functionally obsolete, the tender houses are crumbling - ruins akin to an ancient remnant exposed in a transformed city.

Another intriguing layer to me is that the southeast tender house/tower incidentally looms above the site of the Eastland Disaster. Perhaps the tower could be repurposed to be a proper memorial or an education pavilion like the Michigan Avenue bridge house. Until then, it stands, just for me, an entertaining silent guard, a sentry for my day. 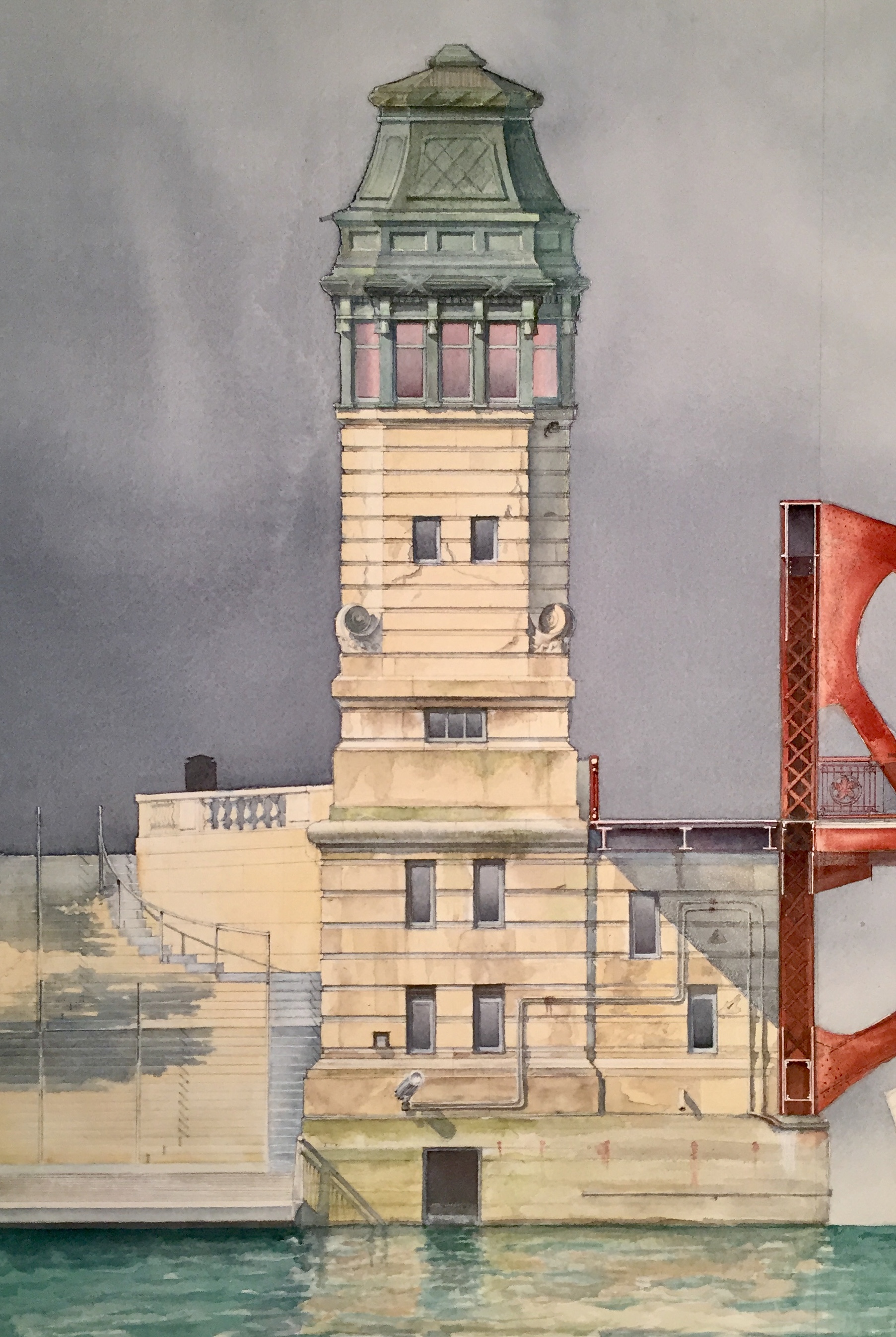 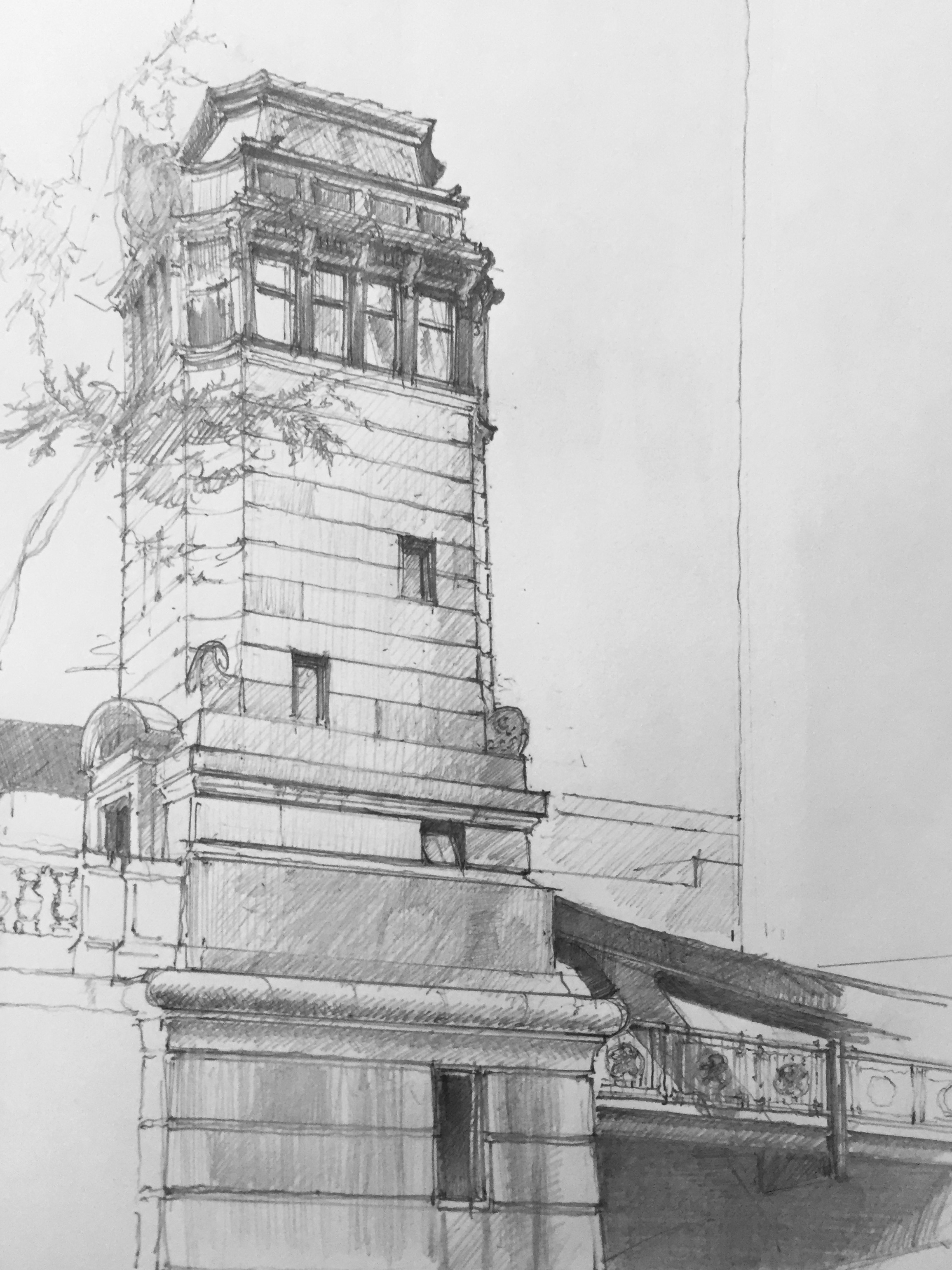 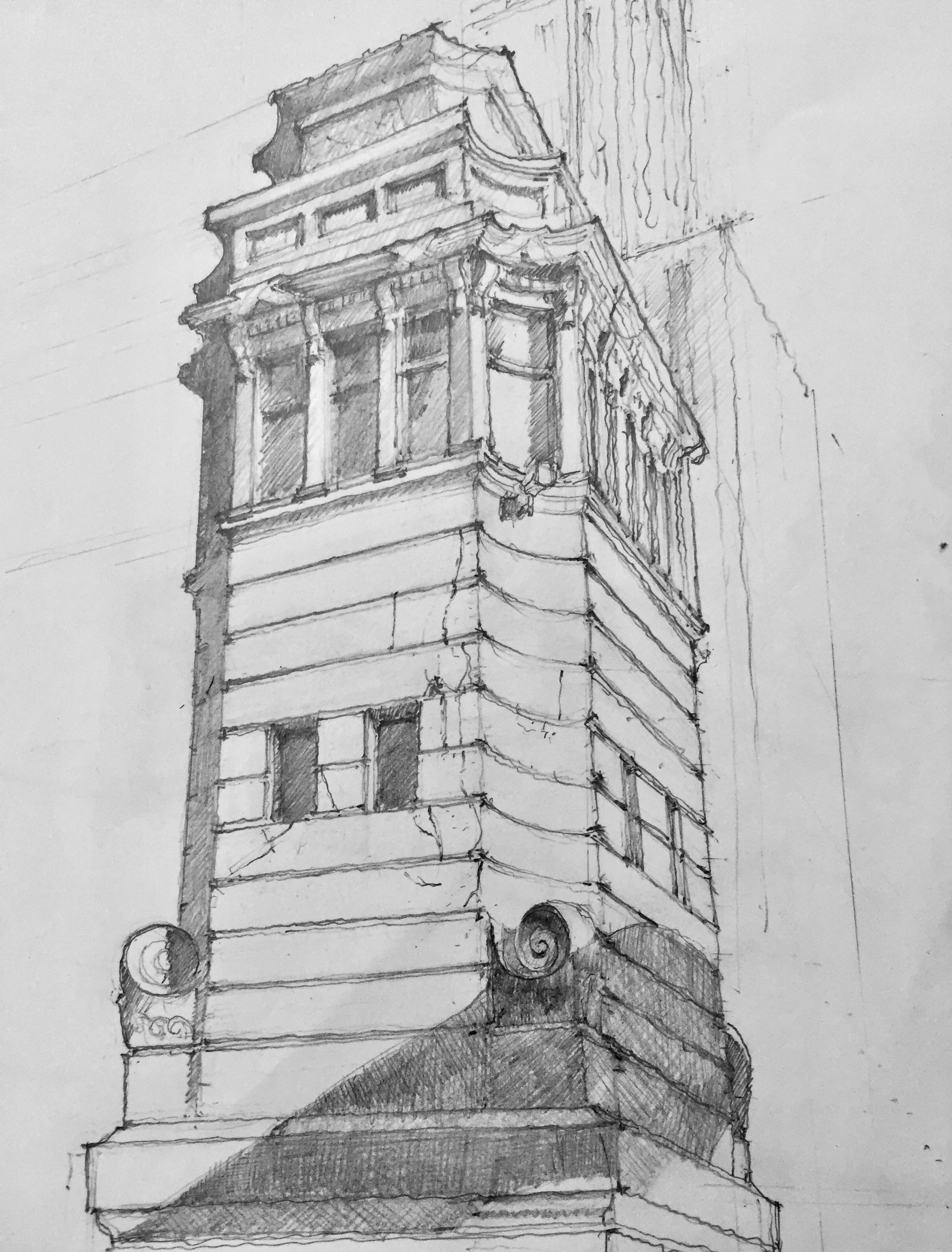 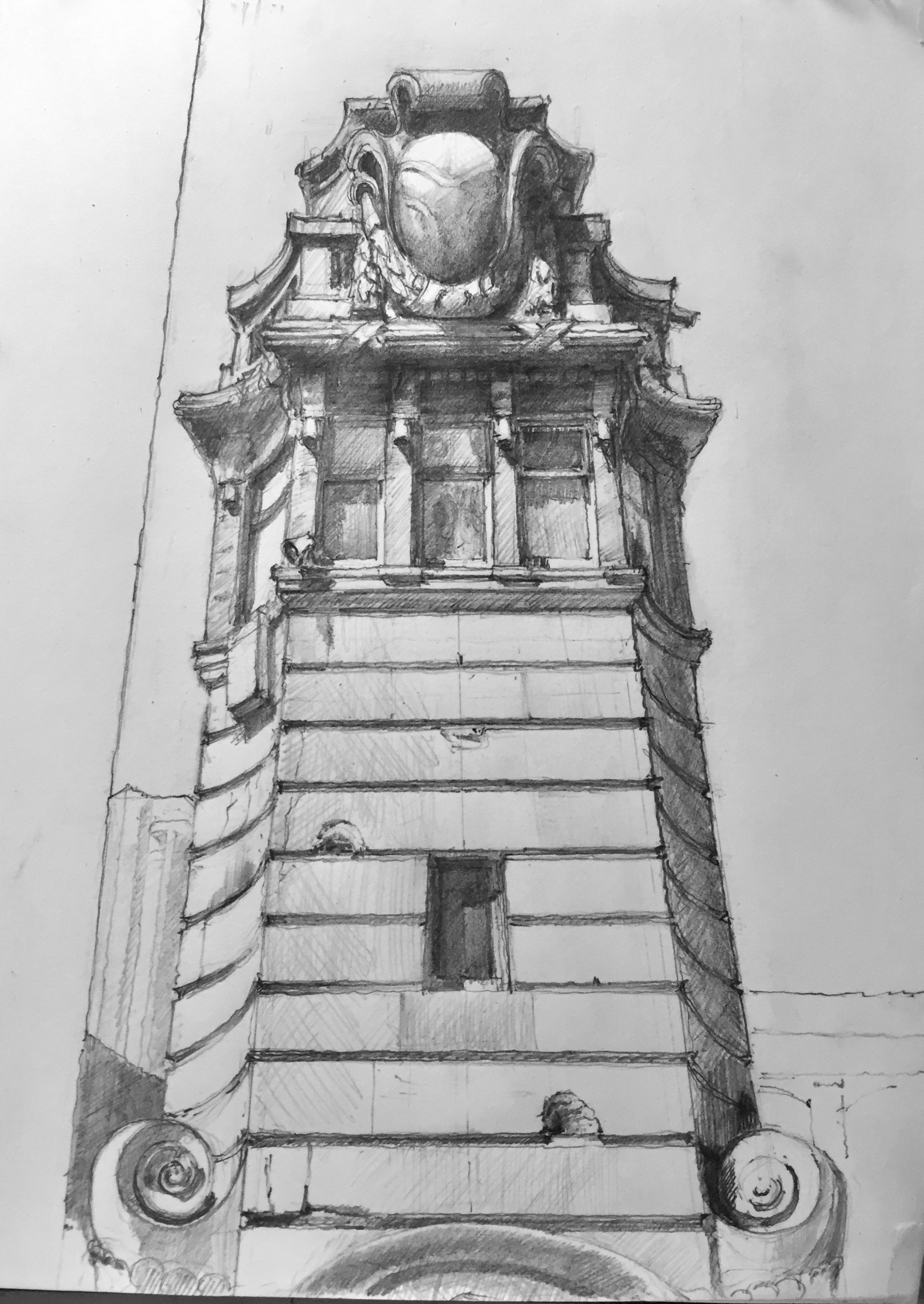 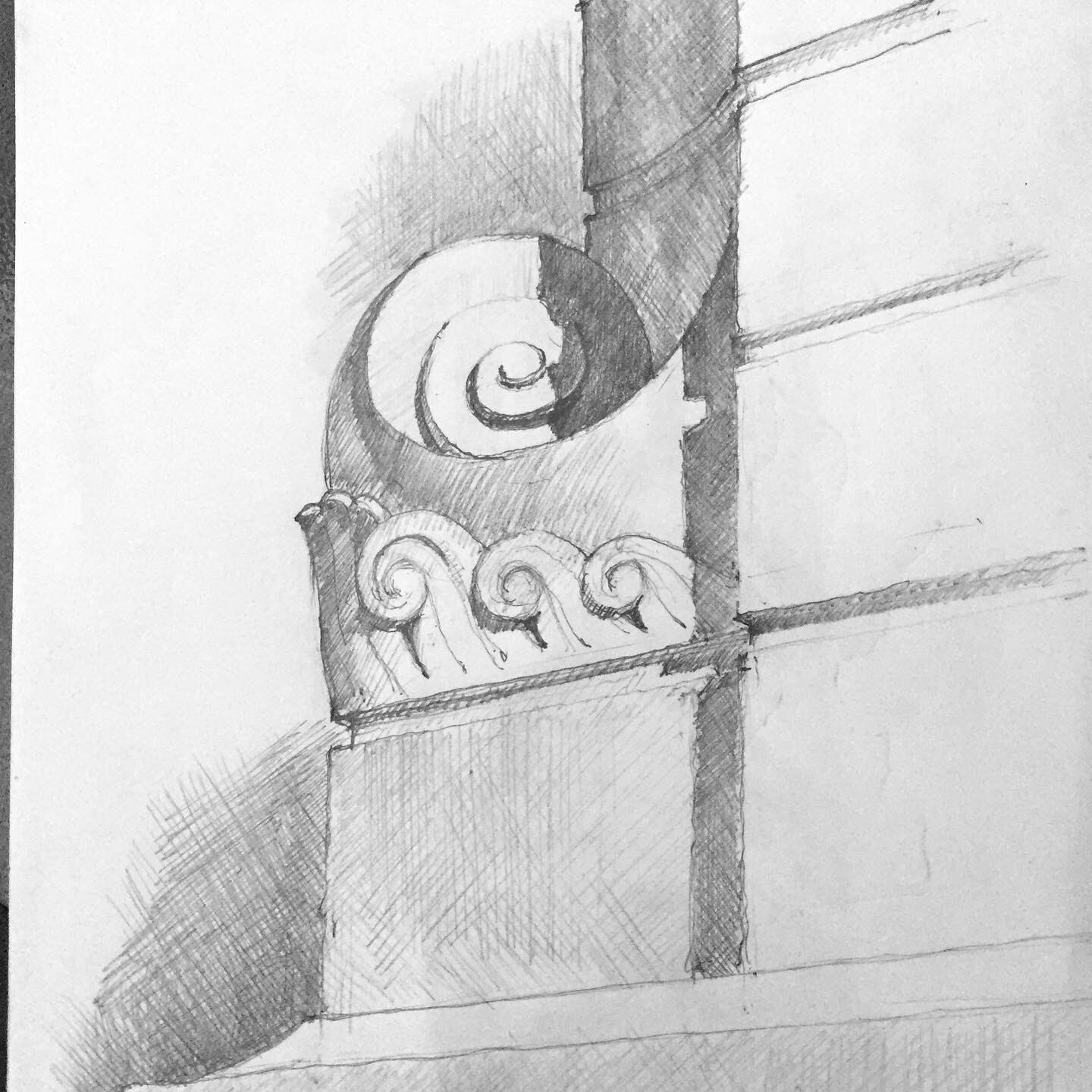 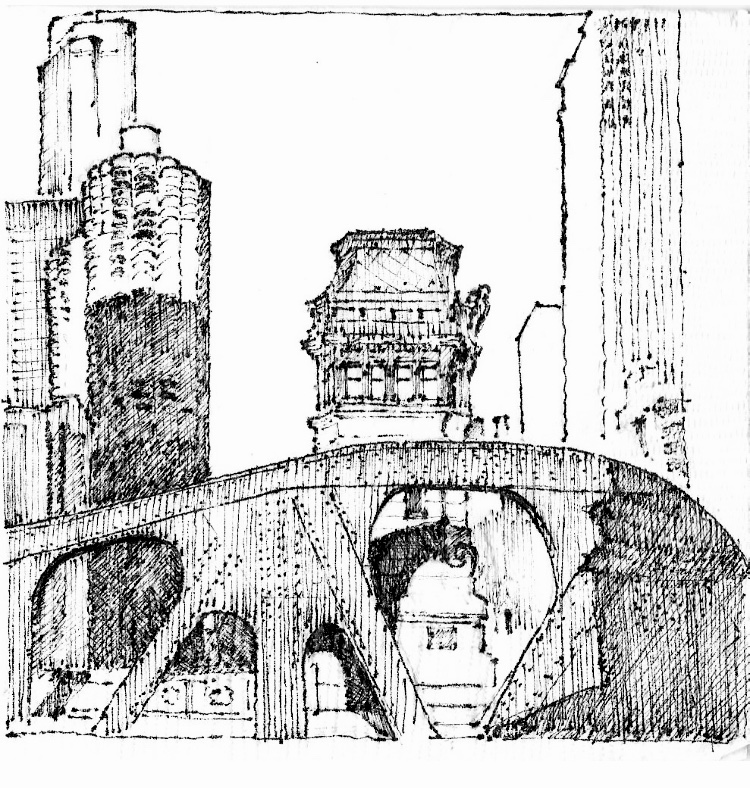